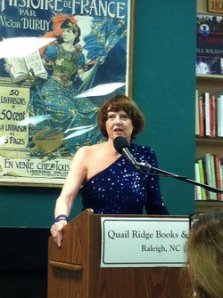 Last night, as guest speaker at a book club in Holly Springs, North Carolina, I talked my way to a new understanding of what kind of novel I’m in the midst of writing.

My two-thirds-written story is one that many readers would consider a fantasy, because a couple of the characters are spirits from what is known as the astral plane.

However, I’ve never thought of myself as a fantasy writer. I like to write and read realistic plausible fiction about the supernatural: spiritual/religious experience as the leading example. My three published novels, all on spiritual matters, likely fall into this category that I am learning to call Visionary Fiction.

My first, Revelation, is about a liberal intellectual minister who began hearing God talking out loud in English, though he had never believed in that sort of thing. This story is not fantasy. It’s spiritual experience. It could happen. It does happen.

Sister India is about an American innkeeper in a Hindu holy city, with scenes that, as in my other novels, focus on the intersection of sex and spirituality. There are moments that are other-worldly, extra-sensory, but not impossible.

Most recently Cobalt Blue is about a woman who has a spontaneous and disruptive spiritual experience, the rising of life force energy in her that some religions call kundalini. The story also involves a respectful treatment of voodoo. This book travels in the realm of belief — beliefs held by many around the world.

All three of these stories fall within the range of spiritual, which is to say: real to those who believe in such things.

So is this new novel a total break in subject matter for me because one of the major characters is invisible? I don’t think so. I think it’s a fictional treatment of yet another religious/spiritual tradition. There are many people who believe in communion with spirits existing in another realm, on an astral plane.

I’m now arguing — as I did at the book club meeting— that what I’m working on is a story based in a spiritual tradition, if not an organized religion.

I’m not going to call those people’s beliefs totally implausible by labeling them superstition or fantasy. They’re not; they’re based on spiritual experience.

So in this new novel in progress, I write, as always, from the stance of: it could happen and some people say it has and does. As a reader and a writer, I want books on the shelf labeled: Visionary, or It May Already Be True.

What else is already on that Visionary Fiction shelf? Some of the work of Robertson Davies, Susan Howatch, Megan Chance, Mark Helprin, Donna Tartt, Paul Auster, Margaret Atwood, Jeffrey Eugenides, and many of the contributors to this site.

Peggy Payne is the author of Sister India, a New York Times Notable Book of the Year;  Revelation, a New York Times Editors’ Choice; and Cobalt Blue, winner of a 2014 IPPY for Visionary Fiction. All her novels focus on the intersection of sex and spirituality.  She has also published in More Magazine, Publishers Weekly, Coastal Living, Family Circle, The Washington Post, The Huffington Post, etc., and most major American newspapers. A NC native, she has also been a TV reporter and travel writer. A New York Times Notable Novelist*Winner of a 2014 IPPY/Visionary Fiction.  www.peggypayne.com