Stephen Weinstock’s 1001: THE QARAQ, BOOK ONE OF THE REINCARNATION CHRONICLES is free on Kindle from Sept 6-10, 2015 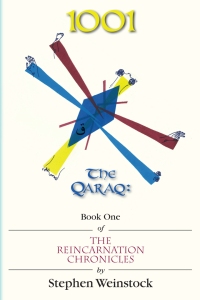 When a mysterious circle of neighbors plants clues about her visions, Sahara learns they are a qaraq, a group of intertwined souls who come together lifetime after lifetime. At secretive meetings, Sahara hears tales of magic realism and realizes her stormy marriage goes back centuries.

Like a modern Scheherazade, Sahara attempts to save her marriage by sharing the past life stories with Amar. But as her karmic knowledge grows, so does Amar’s jealousy. She must abandon the qaraq or risk losing her family.

PRAISE FOR 1001: THE QARAQ, Book One of The Reincarnation Chronicles

“The kind of book that keeps you up later than you intended at night!”

“Whether you believe in reincarnation or not, this is a book which will expand your universe.”

In my past life before 1001, I created music for theater companies (Magic Theater, Eureka Theater), choreographers, and dance studios (Merce Cunningham, Martha Graham).  I have worked as a musician/teacher on the dance faculties of UC Berkeley, Princeton, Juilliard, and the ‘Fame’ school in New York City.

For years I had the idea of a novel puzzling out an intricate past life history between a group of souls, but only with the epiphany of using the ancient frame tale structures of The Thousand and One Nights did I receive the courage to jump fields.  By day I still bring dancers to ecstasy with my improvisations, but at night I enter the world of metempsychosis, time-honored storytelling, and worlds ranging from historical fiction to romantic fantasy.

This entry was posted on September 7, 2015 by Admin - Eleni in Author Announcements, For Readers, Giveaways.